To schedule a consultation, ask questions by phone, or have specific procedure information emailed to you, please enter your information below. 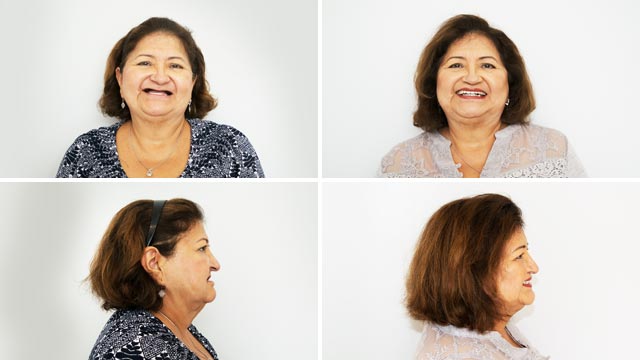 How Dental Implants Changed My Life

Maria is a lovely and laughter-filled woman who has had issues with her teeth from a very young age. Due to dental cavities and poor nutrition, she began losing several of her teeth in her late twenties which led her to require a denture for most of her life. But after the loss of her husband, Maria found herself alone indoors a lot and realized that she needed to get out more. She wanted to be more social and spend time with friends and family. But very quickly she saw that this would involve going out to eat as well as laughing and smiling with others. Something that she had never felt comfortable doing in public. This is what made Maria realize how unhappy she was with her dentures and her smile.

“The problem with my dentures is that they never felt like real teeth. They would always move and I was always so scared of them falling out when I laughed. And couldn’t even chew any kind of tough or hard crunchy foods. If I tried to, it would take me a very long time to chew it and always made me feel embarrassed eating in front of others.”

This is when Maria began looking into dental implants. She wanted to become more social again and wanted to enjoy going out to dinner with friends again without feeling embarrassed. She spent quite a few months trying to decide if this procedure was right for her.

“To be honest, I was scared. I had heard about dental implants but it sounded really painful. I was scared that it would hurt a lot and scared that the implants would be just like my old dentures, or what if they were even worse. But after talking with my dentist and having my family help me do my own research on dental implants, I was finally convinced that this was the best thing for me and I finally went for it.”

Her initial consultation included a thorough dental exam and a CT scan of her mouth. This allowed her dentist to ensure that Maria was a candidate for dental implants as well as what kind of implants would benefit her most. Maria underwent a full arch TeethXpress implant procedure that fixed an entire new set of teeth on top of four dental implants in her upper jaw. This allowed Maria to walk out that same day with a brand-new smile.

“I couldn’t believe it! It was just a few hours and then there I was with brand new teeth! My doctor did explain that these teeth were temporary so that my implants would have time to heal right, so I would need to be careful with them to not chew really hard foods until I got my final set of teeth in a few months. But I didn’t care, I had a perfect new smile and no one else could tell that they were temporary. And I could not believe how little discomfort there was. I’ve had dentures that have caused way more pain and these implants that are actually in my bone caused almost no pain. I almost didn’t believe that they were in there because I couldn’t feel them. But, nope, they’re there. I walked out smiling that day and I don’t think I’ve stopped smiling since.”

Maria had to wait three months until her implants had healed properly and her final custom teeth prosthesis had been prepared by a specialized lab. “I thought it would feel like forever but I was so happy with my new smile that the time flew by. I have to admit, I wasn’t super careful with my temporary teeth because they felt so real right away. It was hard to remember that they weren’t my real teeth and that I needed to be careful. I was already able to eat so much more than I was able to with my dentures. And all of my friends and family noticed how much more I smiled right away. I even began going out to restaurants again with my friends.

Finally, the day arrived when Maria received her final custom prosthesis. “I couldn’t believe how great they felt and looked! It’s just been amazing! I only wish I would have done it sooner. I finally feel like I have real teeth! I can chew normally in front of people and not be embarrassed. I finally ate steak at a restaurant! I tell everyone about my implants. My experience could not have been better. I feel like I’m 10 years younger and am even thinking about dating again, something which I never thought I would ever consider again. I’m so grateful that I got this chance to start my living my life again- that’s really how it feels to me!”

Loading Articles
We're sorry. There are no articles available at this time.
{{#each this}}